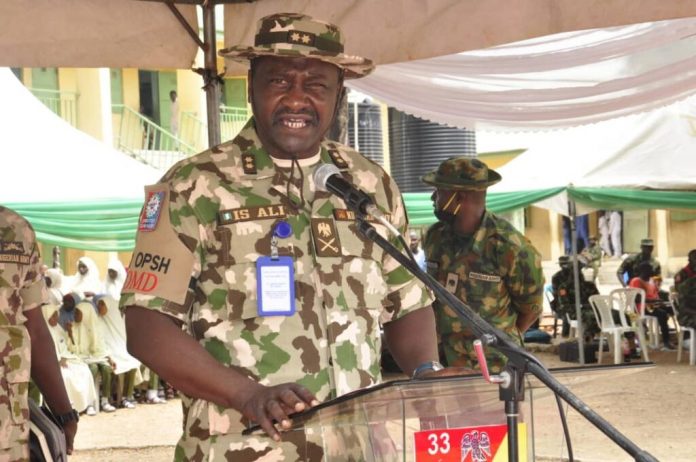 The Commander, Operation Safe Haven (OPSH), Major General Ibrahim Ali has met with the good people of Southern Kaduna, as part of his strategic engagement with critical stakeholders, where he called on all to put an end to all forms of hostility in the area.

The meeting which had in attendance traditional rulers, religious and community leaders called for the need to give peace a chance.

A statement by Major Ishaku Takwa, Military Information Officer said, “While making his remarks, the Commander urged the stakeholders to come up with workable frameworks that will bring about lasting peace in the area.

He added that no meaningful development will take place without peace and security, urging all stakeholders to propagate peace so that socio-economic activities will thrive.

General Ali also used the medium to emphasize the importance of tolerance as stated in the religious books, stressing that this is necessary given our diversity as a people.

He urged stakeholders to educate their subjects on the importance of peace, adding that OPSH will continually discharge its constitutional responsibility with utmost respect for the sensitivity of the local environment.

He further urged them to sustain the cooperation with OPSH, while discouraging tendencies like hate speech and disinformation that are capable of exacerbating crises in the society.

In their seperate remarks, the Mag Rafi Atyap, Deacon Simon Saddi, Rep of Emir of Jamaa, Imam Mohammed Kabir, Rep of Emir of Kagoro, Mr David Peter, Leader of the Hausa Community Zango Urban, Mr Yakubu Bature and others agreed on the need to continue to cooperate with the military for the restoration of peace in their communities.

They also called on religious bodies such as the Christian Association of Nigeria(CAN) and Jamaatu Nasril Islam (JNI) to prevail on their religious leaders not to incite their followers against one another.

The stakeholders also cautioned that until all the tribes in the area cooperate with security agencies by exposing criminal elements in their communities, it will be difficult for the desired end-state to be achieved. They had a consensus on the need to support the military by exposing the bad eggs amongst them.

President of Women in Aviation in Nigeria, Mrs Rejoice Ndudinachi, receives IAP of the year award in Mexico