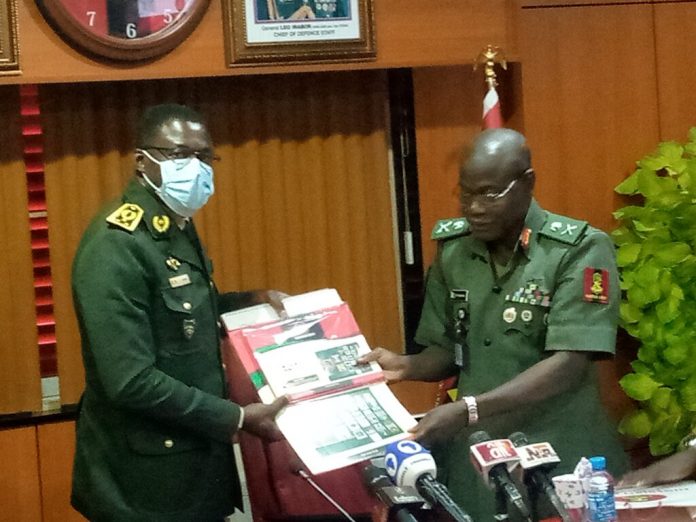 In line with the Chief of Army Staff (COAS) welfare mission to reward hardworking personnel of the Nigerian Army, Newly promoted Guards Brigade Officers who benefitted from the 2021 senior Officers promotion released recently by the Headquarters Nigerian Army, were on Tuesday 5th October decorated by the Commander Guards Brigade, Brigadier General Muhammed Takuti Usman at the Scorpion Mess, Asokoro Abuja.

Ten Officers of the Brigade Promoted to the rank of Major in the Nigerian Army were decorated with their new rank badge in line with the Chief of Army Staff’s directives as stipulated in the 2021 Officers promotion promulgation.

He also stated that the Brigade was blessed having benefitted from the promotion exercise with many Officers elevated to the enviable senior rank of Major in the Nigerian Army.

He also used the opportunity to remind the senior Officers of the need to remain committed and loyal to the constituted authority at all times adding that anything less is unacceptable.

The Commander further implored the decorated  Officers to continue to work hard to make the country and their families proud.

Also speaking during the decoration ceremony, Major General Shehu Usman Abdulkadir (Rtd) while congratulating they decorated senior Officers of their well deserved promotion reminded them that the security situation facing the nation is a cause for concern which calls for more dedication and collective efforts to save the country.

He urged them to use their promotion to work towards ensuring the country’s cooperate existence which he said is non negotiable adding that all hands must be on deck to save the situation.

Also Speaking, the  Commander Guards Brigade Garrison, Lt Col Joshua Okwoli while congratulating the decorated senior Officers urged them to prepare for more tasks ahead reiterating the Brigade’s commitment to ensuring the security and safety of all within the Brigade’s  Area of Responsibility.

In his vote of thanks  on behalf of the decorated Officers’ Major TM Nwogwu thanked God for the Grace, he also thanked the Commander Guards Brigade for the decoration and the COAS for finding them worthy of the promotion.

He assured the COAS that they would continue to  work hard to justify the trust reposed in them by  doing their best at all times as the  promotion would spur them to work even harder being all aware of the challenges facing the country.

The ceremony was attended by the Brigade’s Commanding Officers, Staff Officers and families of the decorated Officers. Below are pictures from the event.

How Gallant Brig-Gen Dzarma & 3 soldiers were killed in ISWAP encounter; They courageously defended Nigerians even at the price of their own lives-COAS.