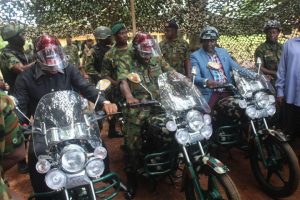 In his determination to halt the communal clashes between border communities of Ebonyi state and Cross Rivers state which has led to killing of scores of villagers and destruction of houses, Chief of Army Staff, Lt. General Tukur Buratai has inaugurated a new Combat Motorbike Command for the 82 division of the Nigerian Army in the South East.

Recently, there has been resurgence of boundary conflicts between Ukelle and Izzi villages of Cross Rivers and Ebonyi States which resulted in the disruption of economic and social activities as well as the loss of lives and properties.

A statement from 82 division said, “In line with his vision to have a Professionally Responsive Nigerian Army in the Discharge of its Constitutional Roles, the Chief of Army Staff(COAS) Nigerian Army, Lt. General Tukur Yusuf Buratai on Saturday the 15th of September, 2018 commissioned first set of Combat Motor Bikes to help troops deployed for internal security duties at the warring border communities of Cross Rivers and Ebonyi States to effectively access all the nooks and crannies of the troubled areas with the aim of containing the occasional clashes between them.

“The nature of the terrain especially during rainy season has made it difficult for security agencies to effectively patrol the areas.

“To alleviate this problem and enhance operational effectiveness of troops in the areas, the COAS authorized the injection of Combat Motor Bikes Platoons to enhance troops’ mobility and access to the difficult areas”.

In a brief handing over ceremony of the bikes at Ipollo – Ntagom Security ‘Out Post’, the Combat Motor Bikes were on behalf of the COAS handed over to the soldiers by the General Officer Commanding 82 Division Nigerian Army Major General Emmanuel Boman Kabuk who represented the COAS.

In their separate remarks at the event, the Governors of the States commended the COAS for the laudable initiative and commitment to ensuring lasting peace and security between the border areas of Cross Rivers and Ebonyi States.

“Never in the history of our States have we seen such a zeal and uncommon commitment to ensuring peace and security in the our states like what the COAS has done. This gesture is complimentary to the efforts of Cross Rivers and Ebonyi States and we thank General Buratai for that”, Dr. Kelechi Igwe stated.

Others who graced the occasion include the Secretary to the State Government of Ebonyi State, Chairman Izzi Local Government Area, traditional rulers and elders of the affected communities.

Military Pensions and Commodore Lawal, One Year After